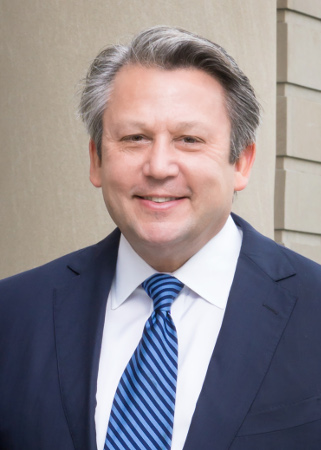 Partner Attorney
Kenneth B. McClain is a nationally known personal injury trial lawyer and shareholder in the Independence, Missouri law firm of Humphrey, Farrington & McClain. In a career that has spanned more than 30 years, he has tried many high-profile cases and won numerous multi-million dollar verdicts several of which have made the National Law Journal’s annual Top 100 Verdicts list. Mr. McClain’s total amount of awarded verdicts and negotiated settlements since 1986 exceed $1 billion.

Mr. McClain has pioneered litigation against asbestos suppliers, the tobacco industry and artificial butter flavoring manufacturers and suppliers in the microwave popcorn industry. He has won verdicts totaling more than $100 million for several workers at microwave popcorn factories who were exposed to diacetyl, a chemical used to make the butter flavoring, and suffered debilitating lung diseases.

In 2016, a jury in Springfield, MO awarded one of Mr. McClain’s clients $20.6 million in damages after she developed an autoimmune disorder from exposure to a toxic chemical that had been dumped on land near her home by a Missouri ball bearings manufacturer. He also secured a landmark settlement in a wrongful death lawsuit by the family of a Maryland college football player who died from concussion-related injuries. The $1.2 million settlement reached with the college, NCAA and two helmet manufacturers contained significant non-monetary provisions aimed at reducing the occurrence of concussions among college athletes.

Most recently, Mr. McClain won a $60 million verdict in New York for a husband and wife business ownership team in a breach of contract case against HMS Holdings Corp.